I’m not a huge fan of nonfiction, but I love learning about history. So, when I want to learn more about a historical topic, I try to find historical fiction books related to it that I can fact check with nonfiction sources as I go along. I generally try to find books that provide new, unique, or overlooked perspectives on the topic. With the election coming up, I thought it might be worthwhile to read some historical fiction about the United States’ presidents. Here are my top picks, along with some nonfiction sources to fact check them, some bonus reads, and where you can find them all.

Summary: Cookbook author Ramin Ganeshram explores the experiences of President George Washington’s enslaved chef Hercules Posey in the years immediately prior to his escape to freedom in 1797. In doing so, Ganeshram offers a view of Washington’s life and term in office that is typically overlooked and yet invaluable to understanding the history of the United States and its first president. The research is exceptional. Ganeshram was even able to shed new light on the topic by locating Posey’s final resting place in New York, thus establishing definitively that he settled there after his escape.

Nonfiction Fact Check: In the Name of the Father: Washington’s Legacy, Slavery, and the Making of a Nation by François Furstenberg (Morgantown Public Library, WV Deli, and Hoopla)

Summary: Described by its Pulitzer-Prize winning author as a “play meant to be read,” Buchanan Dying serves as a window into the final thoughts of President James Buchanan as he lay on his deathbed in 1868. The play is meant to replicate the processes of a dying mind, with the central set piece of Buchanan’s bed providing a focal point for the constantly changing array of acquaintances and memories that approach the fifteenth president to plague him with regrets and recriminations in his last moments. It’s a technique that offers many poignant scenes, among them one in which Buchanan’s memory of the announcement of South Carolina’s secession from the Union in 1860 melds with that of the end of his engagement to Anne Coleman in 1819.

Bonus Read: Mr. Buchanan’s Administration on the Eve of the Rebellion by James Buchanan (Internet Archive)

Summary: A book of slam poetry connecting First Lady Mary Todd Lincoln’s late-life hallucinations of being scalped by a Native man to President Abraham Lincoln’s decision to order the execution thirty-eight Dakota men in retaliation for the Dakota War of 1862. Howe’s poems delve not only into the Dakota War itself but the life of Mary Todd Lincoln and her relationship with the sixteenth president as well. More than anything, Savage Conversations is an exploration of the consequences that presidential politics have on a personal and familial level even decades after a president’s term has ended.

Summary: The fourth installment of Gore Vidal’s seven-book Narratives of Empire series, Empire can be read as a standalone novel of the United States’ first forays into becoming a global empire after the Spanish-American War in 1898. Presidents William McKinley and Theodore Roosevelt figure heavily in the narrative, as do well-known characters from the period like William Randolph Hearst, John Hay, and Henry Adams. Vidal is well-known for his ability to explore the highs and lows of human character and motivation in his writing and this is no less true of Empire, which offers readers an unforgettable glimpse into the idiosyncrasies of our turn-of-the-century leaders.

Summary: A depiction of the undeniably romantic relationship between First Lady Eleanor Roosevelt and Associated Press reporter Lorena Hickok, first uncovered by historians in the late 1970s. Bloom explores the nature of that relationship as well as its interaction with the life and administration of President Franklin Delano Roosevelt. The story has particular relevance for readers in Monongalia County, since it was Lorena Hickok who initially drew Eleanor Roosevelt’s attention to the plight of coal miners in the Scotts Run area and set in motion the events leading to the creation of the community of Arthurdale.

Bonus Read: Empty without You: The Intimate Letters of Eleanor Roosevelt and Lorena Hickok by Rodger Streitmatter (WV Deli)

Summary: Thomas Mallon is known for his high level of attention to historical detail and context as well as his fondness for including the perspectives of “bystanders” to history. This novel is no exception, detailing the experiences not only of figures like President Richard Nixon and Watergate burglar E. Howard Hunt during the Watergate scandal but those of Nixon-familiars like Alice Roosevelt Longworth and Joseph Alsop as well. It’s a more sympathetic portrayal of the scandal than would have been written forty years ago, but nonetheless seeks to plumb the depths of presidential corruption and fallibility with an unwavering regard for the truth.

Nonfiction Fact Check: Nixonland: The Rise of a President and the Fracturing of America by Rick Perlstein (Consortium)

Bonus Read: The Presidential Transcripts by the staff of the Washington Post (Aull Center) 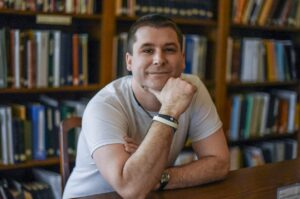 Nathan is a staff researcher at the Aull Center for Local History, a division of the Morgantown Public Library System. He received his doctorate in history from The George Washington University and is a co-host with Mike McClung of Aull About History, a local history podcast produced in partnership with The Dominion Post.